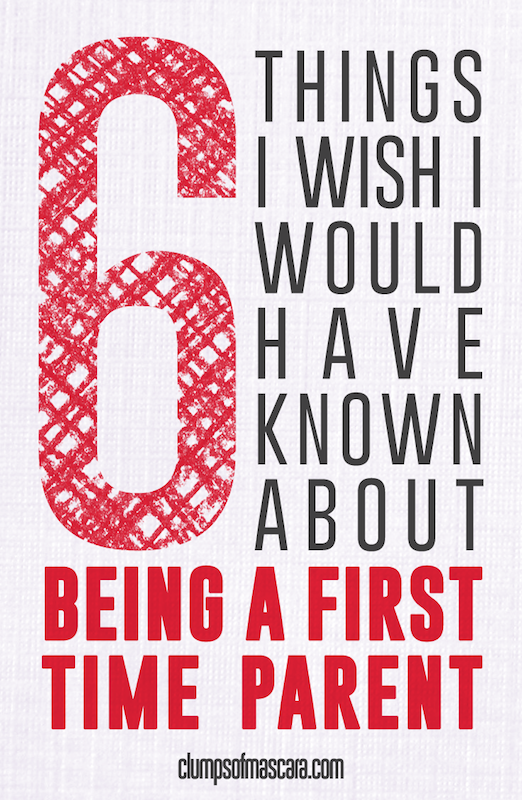 It’s been a minute since I’ve done a baby post. I was inspired by the blog Baby Sideburns. If you haven’t read that blog, pleeeeease check it out. I love this lady’s approach to parenthood. She keeps it real and doesn’t care what you think about it. I’d much rather read parenting blogs like hers versus the ones that are all like, “I want to raise balanced children and practice attachment parenting, blah blah blah.” Whatever. I like when parents delve into the positives AND negatives of parenting.

So here we go: 6 Things I Wish I Would Have Known About Being A First Time Parent

You really WILL miss being pregnant.

FACT: I didn’t enjoy pregnancy that much. I was practically dying the first 4 months and while 2nd trimester was fun, it flew by. And then 3rd trimester came along and brought back pains, heartburn and anxiety. Don’t listen to those women who are all like, “Pregnancy is soooo wonderful.” They’re lying. They didn’t tell you about the hemorrhoids, spontaneous diarrhea, random rashes, sciatic pain or insomnia. But the crazy thing is, even after the physical pains of pregnancy and labor/delivery, I actually MISSED being pregnant. It’s as if I forgot about the morning sickness. I missed the lovely things like feeling EB’s kicks and watching my tummy grow. I missed how powerful I felt. I really do like my body 1,000x better when I’m not with child because pregnancy will wear your body ouuuuut.

Showers and baths are luxuries.

Actually someone did tell me there would be days when I wouldn’t have time to bathe and I didn’t believe them. But it’s so true! Judge me all you want but my longest stretch without bathing was 4 days. I smelled like fresh breast milk and regurgitated breast milk. And defeat. Yes, defeat has a smell. Sexy, uh? Who really has time for a shower when you’ve got a baby who gets up every hour or two? And when they aren’t sleeping, you’re either trying to stuff your face or you’re standing over their crib watching them breathe. So yeah. For all of you folx without kids and want to know what to get that new mom in your life – save the onesies and burp cloths. Come to her house and watch the baby while she showers. Oh, and bring food. In fact, if you were coming to visit me and EB during the early weeks, you weren’t allowed in my house without food.

A new baby may alter your marriage a bit.

A baby is a new and hard adjustment for a couple. I was physically tired and overwhelmed and while Esposo went to work a week after EB was born, he was dealing with the guilt of not being around enough WHILE trying to provide for his family. Neither one of us have any family in the area so we had very little help with EB. Our communication halted because I was an emotional wreck and couldn’t always vocalize when I needed help. In fact, things didn’t get better until months later. Every couple deals with this in their own way (and some couples never have adjustment issues…lucky ducks!) but it was definitely something I didn’t expect. You will adapt to having little to no sleep.

I never thought I could do it. I’ve never been one to function without less than 6 hours of sleep. But honey….I am a pro at sleep deprivation now. I will forever toot my own horn because I not only catered to a newborn around the clock but I pumped every 2 hours, maintained a blog, kept the house decent AND had dinner cooked every night. I’m lying about that last part. Y’all know I married Esposo for his cookin’. 😎 But seriously, your body will adapt to the no sleep thing. Oh, and you’ll never sleep in again. Maybe when the kid is 5 or something but yeahhhh….those days of sleeping until 10am are over. Yeah. I cried about it, too.

You officially become one of them: A person with a child.

Parenthood is a club. And it really doesn’t feel like that until you become one. Before kids, I was just a person without kids. But now that I’m a parent, my social life is baby-based. When friends are all like, “Ooooh, let’s do dinner at 6pm.” I’m all like, “Um no! EB has to get picked up from the sitter.” Everything I want to do is surrounded around the bebe. And only friends with kids get this. They understand if I’m running 15 minutes behind because even though I was ready to leave EB had poop seeping out of her diaper and then spewed milk all over her dress. Friends with kids get it. Friends without kids aren’t always so understanding and I get it because I too used to be like “OMG…do your kids control your life?” Actually, they do.

If you’re breastfeeding, you’ll want to eat all the time.

I wasn’t the typical pregnant woman. I never had cravings, gained 9 lbs during pregnancy and lost 12 lbs shortly after giving birth. And although I exclusively pump for EB, I didn’t think I’d deal with the normal breastfeeding woes. Like the ravenous appetite. That appetite is unreal, y’all. It’s like, “Feed me now! Feed me everything in sight.” And I get it – pumping/breastfeeding burns a lot of calories but dang, I never expected to eat insane amounts of food. And the crazy thing is, you don’t even care. Like normally I’d be embarrassed about eating so much. Pfft. Whatever. The first time I went to brunch with a gal pal I ordered TWO meals to eat there and then a meal to eat on the way home. Because the 15 minutes it took to get home, I just knew I’d be starving again. True story.

I like to consider myself emotionally stable. Haha. Just kidding. But seriously, I’ve never dealt with depression so I just knew I wouldn’t have an issue with the baby blues. Please. I was an emotional, hot and cold, crying mess for 3 weeks straight. It felt unreal. I’ll never forget the day Esposo and I were chatting and I just burst out into tears. He’s all like, “What’s wrong?” “I don’t knowwwww.” I’m telling him. I was literally crying for no reason. None. This happened frequently. In fact, when I noticed that I hadn’t cried for an entire 3 days, I felt like throwing myself a party. Being a new mom is haaaaard. It just is. You are physically and emotionally overwhelmed ALL the time. You adore your baby but you kinda miss the free life, too. You want more help but you want to do everything yourself. You want to be the perfect mom but baby won’t stop crying. You want to poop but that whole “just had a baby” thing makes it difficult. Too much information? Whatever. These things are important to know and I wish someone would have told me. I was glad to know that several other girlfriends also dealt with baby blues and got over it. And those that didn’t, went and got professional help.

But through it all, being a Mom is awesome. And fun. Any first time parents out there?