[NOTE: This post is written by Esposo. He was invited to a media event at the restaurant Avu Avu. Jealous doesn’t even begin to describe how I’m feeling looking at these pictures. By the way, he took the pictures too. Talented chap, isn’t it? I’ll keep him.  Carry on!-B] 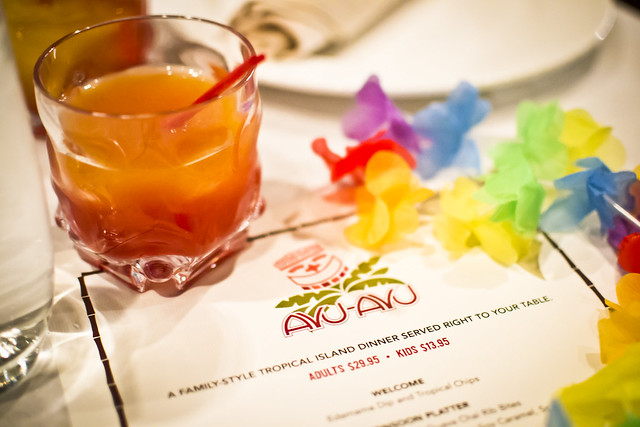 It’s good to be the king.

And kingly is how I felt upon entering the warm and inviting (if a tad dark) dining room at Avu-Avu. It’s not often I get greeted by a pretty hostess, given a colorful lai, and given a tasty tropical drink all within my first five minutes. It’s not quite the Hawaiian vacation I’ve been dreaming of, but that’ll do, pig. That’ll do.

Now all of this might have been because I was there as part of a group of social media allstars dubbed the #AvuAvuCrew, but I’d like to think it’s all part of the usual package. As I sat down with Droolius, Tasty Chomps, Eating Orlando and more, I couldn’t wait for the rest of my intro to the Buena Vista Palace’s new Polynesian concept. 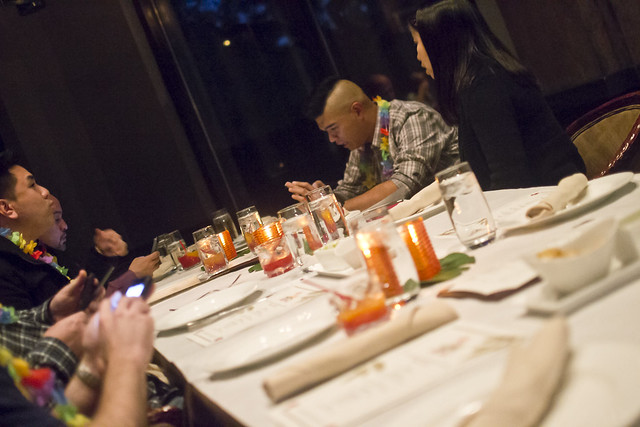 To be blunt, this meal was amazing. Instead of doing things in typical restaurant fashion, Avu-Avu serves their dishes family style and gives you unlimited access to the goods. (Waistline’s beware!) We started out nice and easy with edamame dip and tropical chips to snack on alongside our the previously mentioned cocktail. Then we got down to business. And by business I mean PORK. 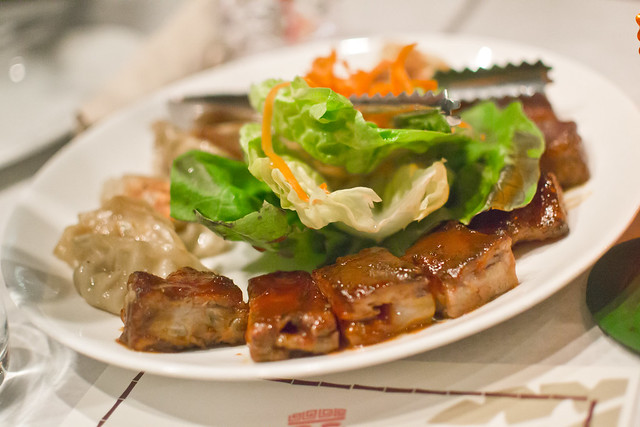 The Monsoon Platter may look like your typical Chinese/Hawaiian combo of potstickers and rib bites, but wait until you taste the guava chai barbecue sauce. Out of this world. No, that is not a typo. No, I’m not crazy. Yes, guava CHAI. Stop looking at me like that.

I know it sounds strange, but that sauce (which I need bottled, STAT) is only the tip of the iceberg. Each protein on the menu is paired with an innovative sauce or marinade using flavor profiles I’ve never seen before.

Expertly grilled skewers featuring Coffee Colada chicken breast, Root Beer BBQ pork, and Kalbi Marinated sirloin will have you asking for extras and needing to be wheeled out the door. 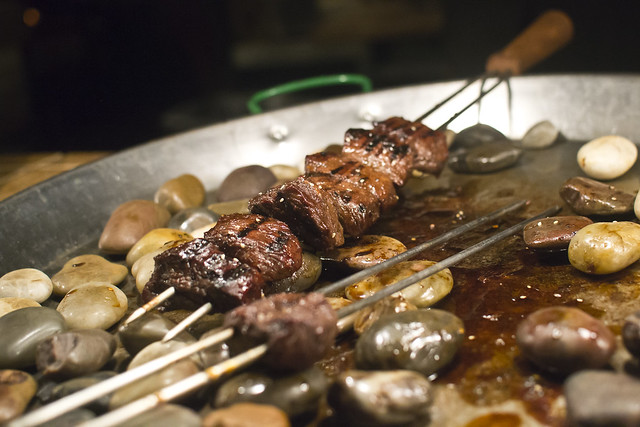 And did I fail to mention that the Monsoon Platter comes with a trio of tasty dipping sauces? Just make sure to only use them on the chicken potstickers or I shall be forced to thrash you. 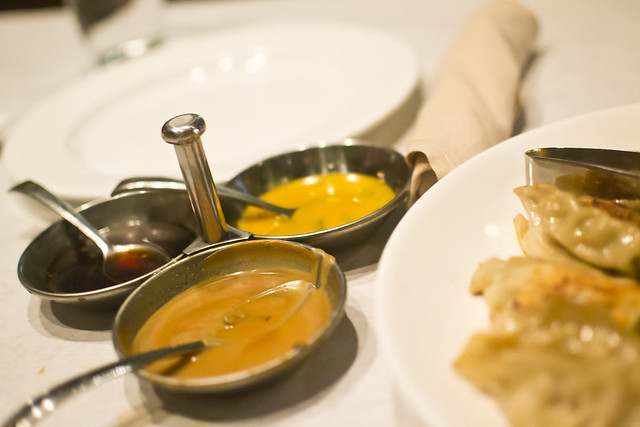 To accompany these finely flamed feastables there was a tossed salad featuring toasted coconut and rice crackers with a carrot ginger vinaigrette as well as steaming bowls of stir fried udon noodles with lemon garlic broccoli. I know what you’re thinking, but fear not: the noodles weren’t at all greasy and the broccoli was expertly steamed so that it still had some bite to it. No limp lifeless veggies will be found here. 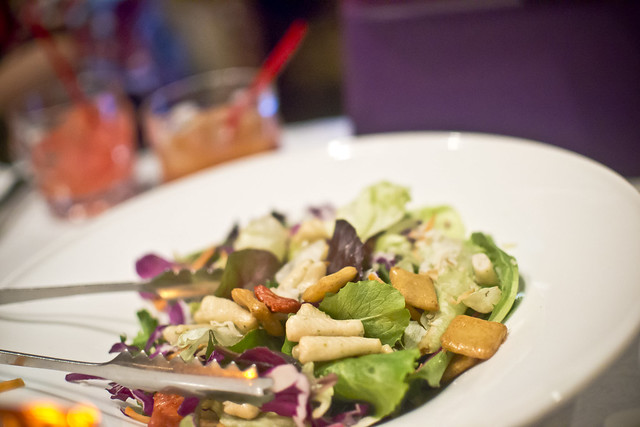 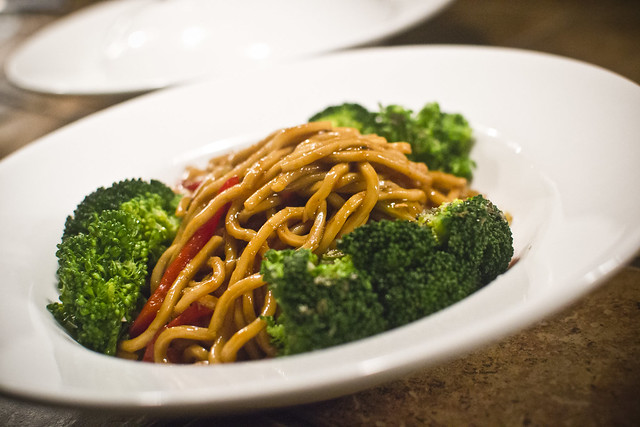 That’s not to say there were no negatives at all. The Citrus Ginger shrimp was kind of disappointing after all the greatness surrounding it, and it seems as though the cooks prefer to grill the Kalbi Marinated Sirloin on the rare side. That’s just fine for a predator like myself, but if you’re one of the masses who’s afraid to let his beef “moo” as it comes to the table, make sure to let your server know your preferred doneness.

As we closed out the night, all missteps were forgiven as dessert was served. Caramelized Pineapple Coconut Milk Cake was quite the mouthful to say and to eat, but eating it was an unforeseen pleasure. 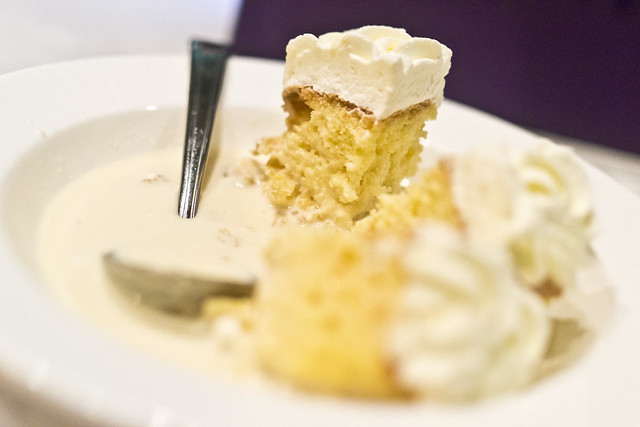 You see, I don’t like coconut. Never have. Never will. But THIS concoction had me wishing I hadn’t been quite so enthusiastic about the guava chai rib bites. A rich, but not too rich yellow cake, laced with pineapple chunks, and bathing in a bowl of coconut milk was just what the doctor ordered and a perfect way to end the meal. Especially when I had the brilliant idea of dumping some of the milk sauce into my coffee. Yum.

At $29.95 a head and unlimited eats, I’d say that Avu Avu definitely goes into the “win” column. The food prep was top notch, the staff gracious and inviting, and the sauces were insanely good. 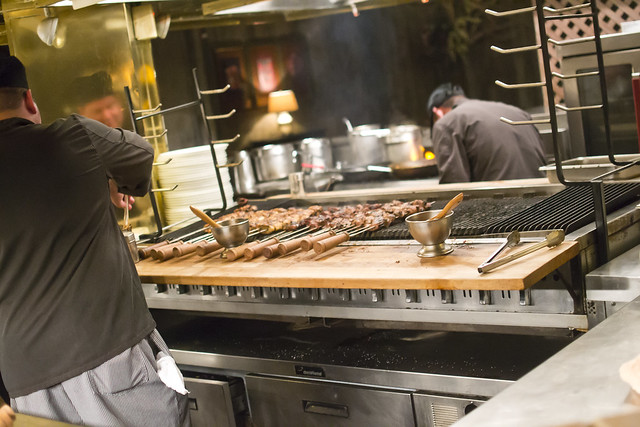 The only thing I’d suggest is that they start selling that guava chai rib sauce before I’m forced to raid coroporate headquarters for the secret recipe.

Want to win a dinner for 2 at Avu Avu? Shoot an email to Brittany@ClumpsOfMascara.com with the subject: Feed Me. I’ll be giving a gift certificate away. I’ll be choosing a winner on April 28th at 8 PM EST.

« The Story Of The NARS Lip Pencil That I Wore For 2 Weeks Straight
Mascara Monday: Revlon Lash Potion by Grow Luscious mascara »