Lupita Nyong’o and Danai Gurira make me feel as if I’m on first name basis with them. These women felt like friends and sisters. When I heard Danai use the word “Africanist”, I ’bout fell out of my chair because my goodness…she gets it.

This was my first time getting the opportunity to be this up close and personal with so many big celebrities and while I didn’t get the chance to shake hands with these ladies, getting their eye contact while they spoke meant so much to me. 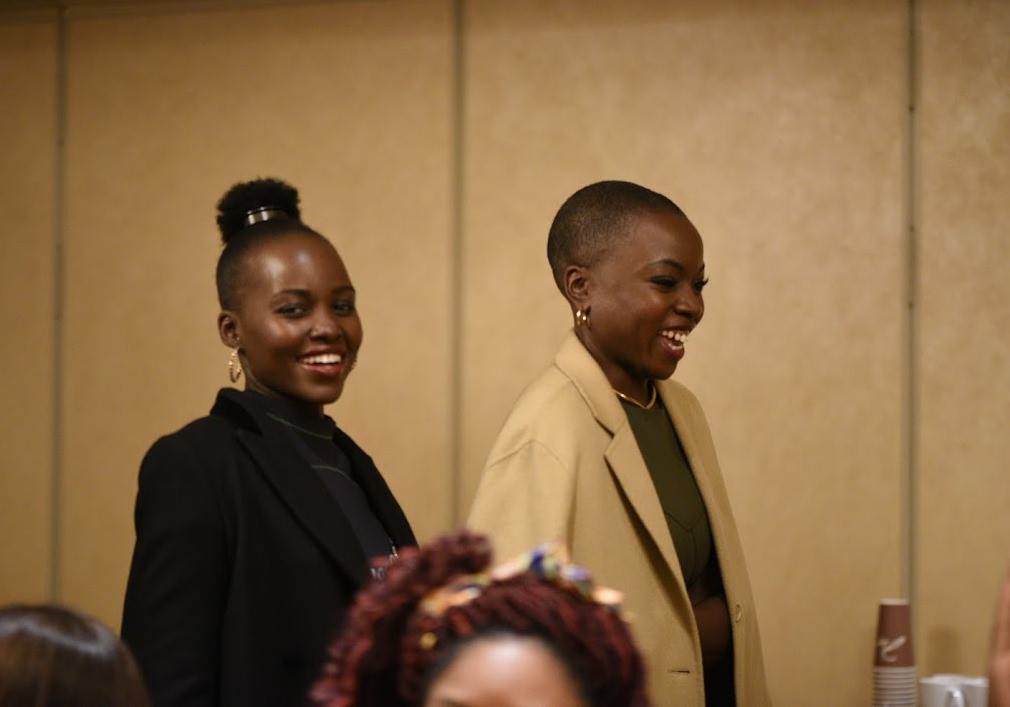 Shout out to Natasha from Houseful of Nicholes for all of these stunning pictures.

On connecting with the character

As a viewer, I feel like we always want to know how celebrities connect with the characters that they play. You can tell Lupita and Danai thought long and hard during this process.

Lupita:  I identify with Nakia’s independent spirit and her feeling loyalty to her country. I relate to that and so I think that was my in to figuring out who she was and I love a woman who is on a mission to make a difference…which is what she’s on.

Danai: Yeah, I definitely related to her, you know, her power and purpose. I think she was purposed since she was quite small. I was saying earlier I really see her as a very intense ten-year-old. That was just her focus in life and I sort of, I never wanted to be in the military per se but when I decided what I wanted to do, I was very clear about it. I could really relate to that about her, about the way that she is so dedicated to her nation and so dedicated to her people. We’re both from the continent and the passion I have for what I feel the continent could be is very strong in me. There were so many things that were so very easy to connect to. 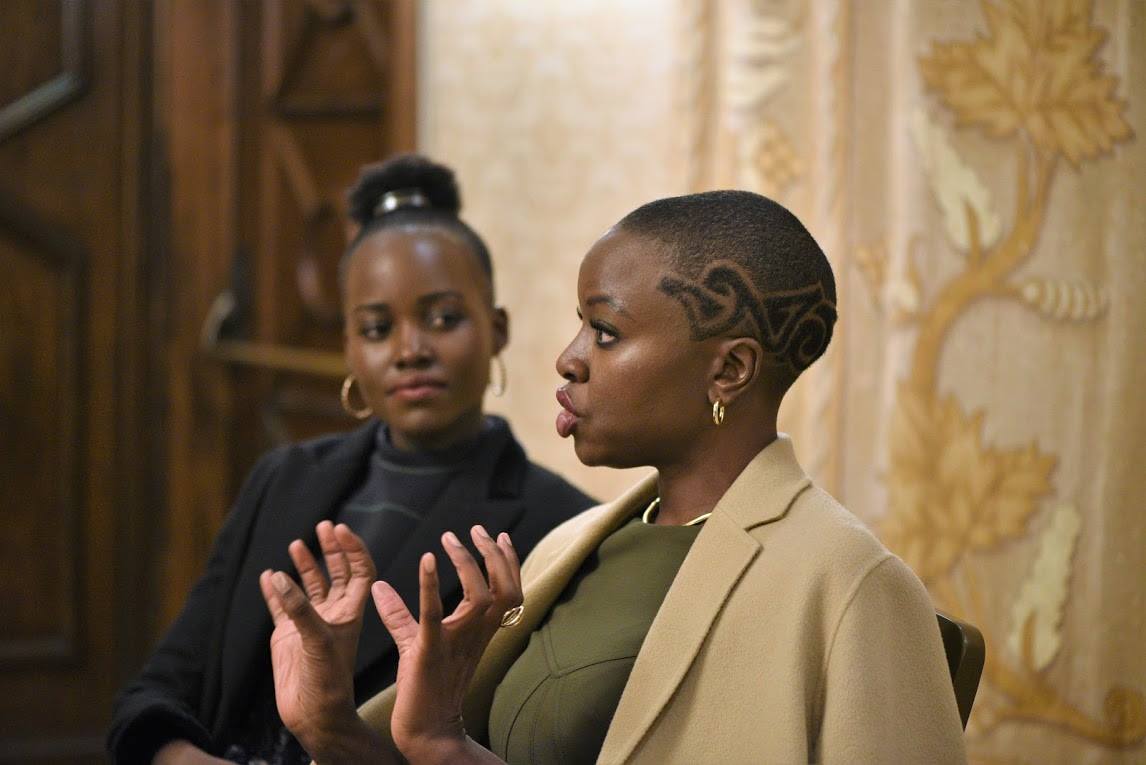 How they prepared for the fighting scenes

I promise, no spoilers here but my goodness, we could not get over how dynamic these women did during some fighting scenes. It’s an action movie, after all so we knew it was coming but they blew our minds!

Danai:  You know, these women are different and their fighting styles are very different. Mine is very traditional. Hers is…get the job done. There was a lot of, a lot of preparation for that scene…

Lupita: It was tedious but fun.

Danai: Yeah, it was fun. The idea of stepping into a character who’s connected to this traditional ancient way of moving was really amazing. I loved how they found that for each of us and then they put that into it in training and helped us. And then we found it and we owned our characters around that…those movements.

Lupita: The training was a big part of getting into character because understanding how someone fights reveals a lot about what their values are and who they are. When we were first talking about Nakia’s fighting style Ryan said to me, “She’s street,” and that was really all I needed. So by any means necessary, she will use any weapon. 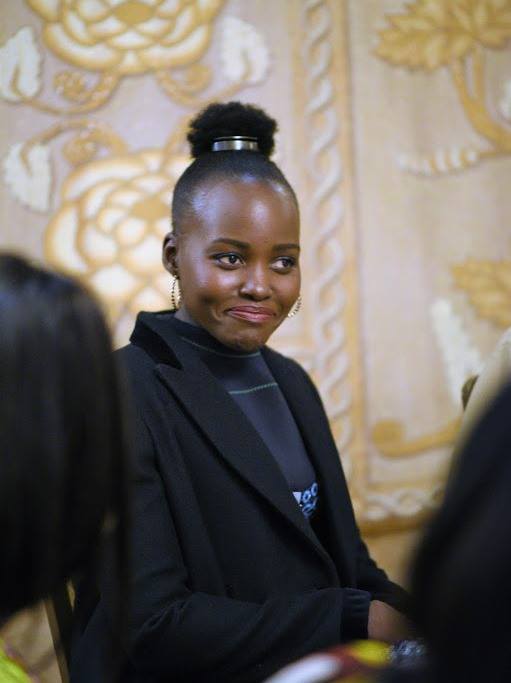 Lupita and Danai are African women and let’s face it…it’s not very often that we see African and African-American women on the big screen and especially in a superhero movie. I loved learning a bit more about how they wanted to make these characters shine.

Lupita: Well, I think for both of us, especially when we’re dealing with African representation, in story, we feel such a strong sense of responsibility and desire, deep desire, to see African women on screen that look and feel like we know them to be. And so with these characters, we wanted them to be women that we know and the women that I know are complex and they’re deep and they’re about something other than just the man in their lives. I think that was really important to us.

It was also really important to Ryan as well to have women who are standing in their own in this movie…women with agency and strength and strength does not mean an absence of vulnerability but it means that you understand, you have it in yourself to get yourself through things, you know, to seek help.

We really get a sense of what Wakanda’s society is like and we see a society where men and women are participating fully in the development of the nation and in so doing they’re reaching their full potential and that’s good for everybody. 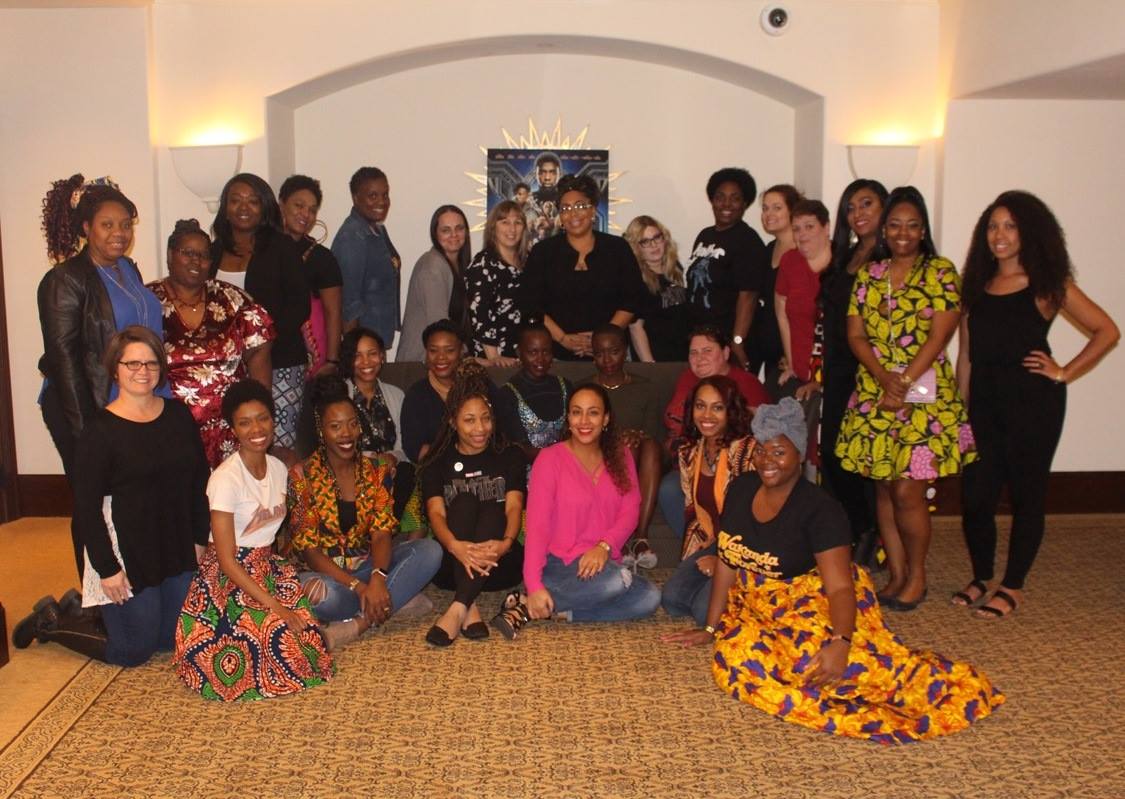 It’s hard to not notice the hairstyles in Black Panther. Like so many things in this film, there was a purpose behind the styles and I loved learned more on how Lupita and Danai felt about the crowns that they rocked.

Danai: I think the beauty is such a celebration and I think that that’s what’s so powerful to me. You often don’t see Africanisms celebrated and so I think that completely connects with the hair. I love what the hair department and the costume department did. They really pulled from real actual cultures and ethnic differentiation and how hair is celebrated across the continent traditionally and currently. I think there is something really powerful about all the ways that hair was represented.

Nakia’s got her little knots and then she’s got her fro and Okoye loves her bald head and she doesn’t like to wear wigs. I think that is a celebration we’ve rarely seen exhibited in such splendor so that really excites me for people to see.

I wish we could have chatted with them more because they gave us so much insight on the powerful roles that they played. I can’t wait to see this movie again!