I’m not going to lie. I geeked out a little bit when Bob Odenkirk walked into the room. I’m a massive Breaking Bad fan and to have an actor whose shows I’ve watched for YEARS in front of me had me fangirling like mad. Both Bob, who played Winston Deavor and Catherine Keener, who played Evelyn Deavor did not disappoint. They were hilarious, open and were so great at answering our questions and helping us learn more about the roles that they played and what they meant to them.

I think this is what I love most about these interviews. You can tell that the actors and actresses do a lot of processing when it comes to getting into character. They’re brilliant at it and getting up close and personal with them makes me enjoy the movies that much more. 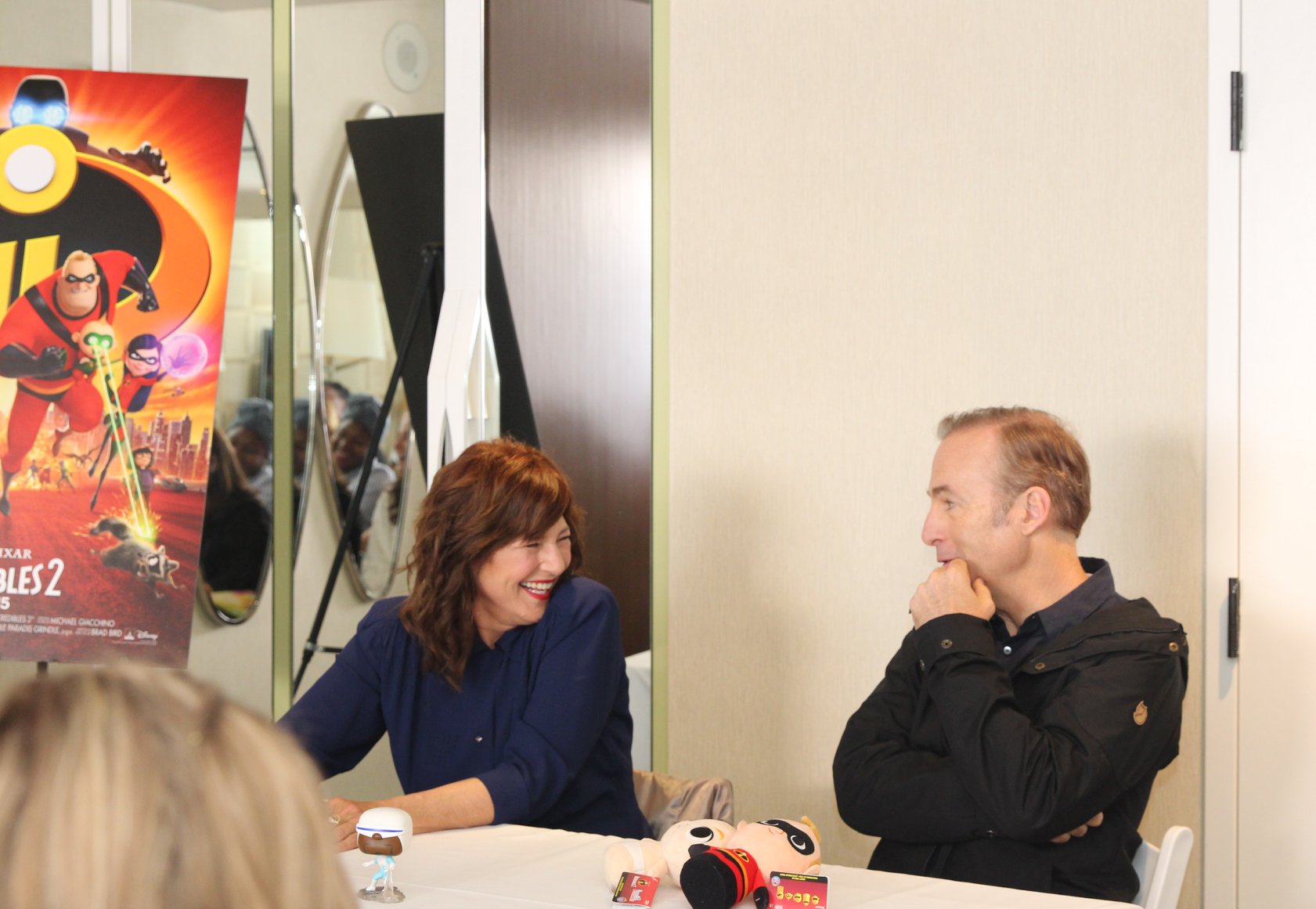 On seeing yourself animated

Never mind that they get the chance to play characters on an iconic film but I think anyone would be pretty excited to see themselves animated. We wanted to get an idea on their first reactions.

Bob: People have said my character looks a lot like me, and there’re ways I think, yeah, that it is. And then there are ways I’m like, wow, I’m not remotely like that. Obviously, I don’t dress as well as the character. That’s for sure. I kinda like him. I have to get more familiar with him. My family’s proud of it, and they’re like, “Yeah, Dad, it’s a great character.” 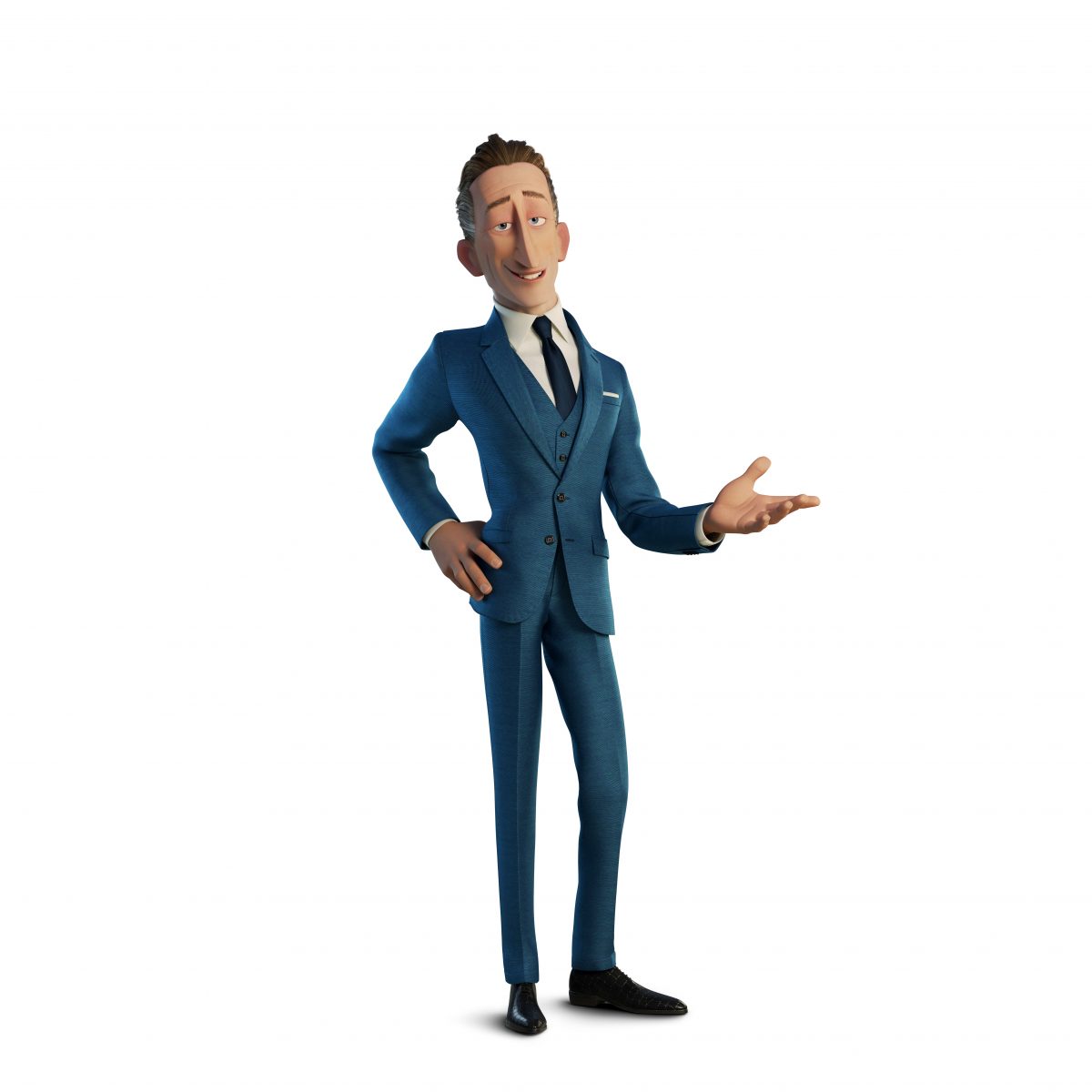 On if they could have one superpower

We loved asking this question in just about all of our interviews. It’s too easy and every actor or actress got really excited just thinking about their responses. Bob and Catherine did not let us down and their answers provided us with endless laughs!

Bob: I would like to be able to eat whatever I want and not gain weight.

Catherine: Teleportation. Anywhere and go home. I’m home. I’m in my pajamas. My bed’s made. Clothes are off the floor. And I’m ready to go to bed, you know. I’m gonna watch some TV and I’m set. 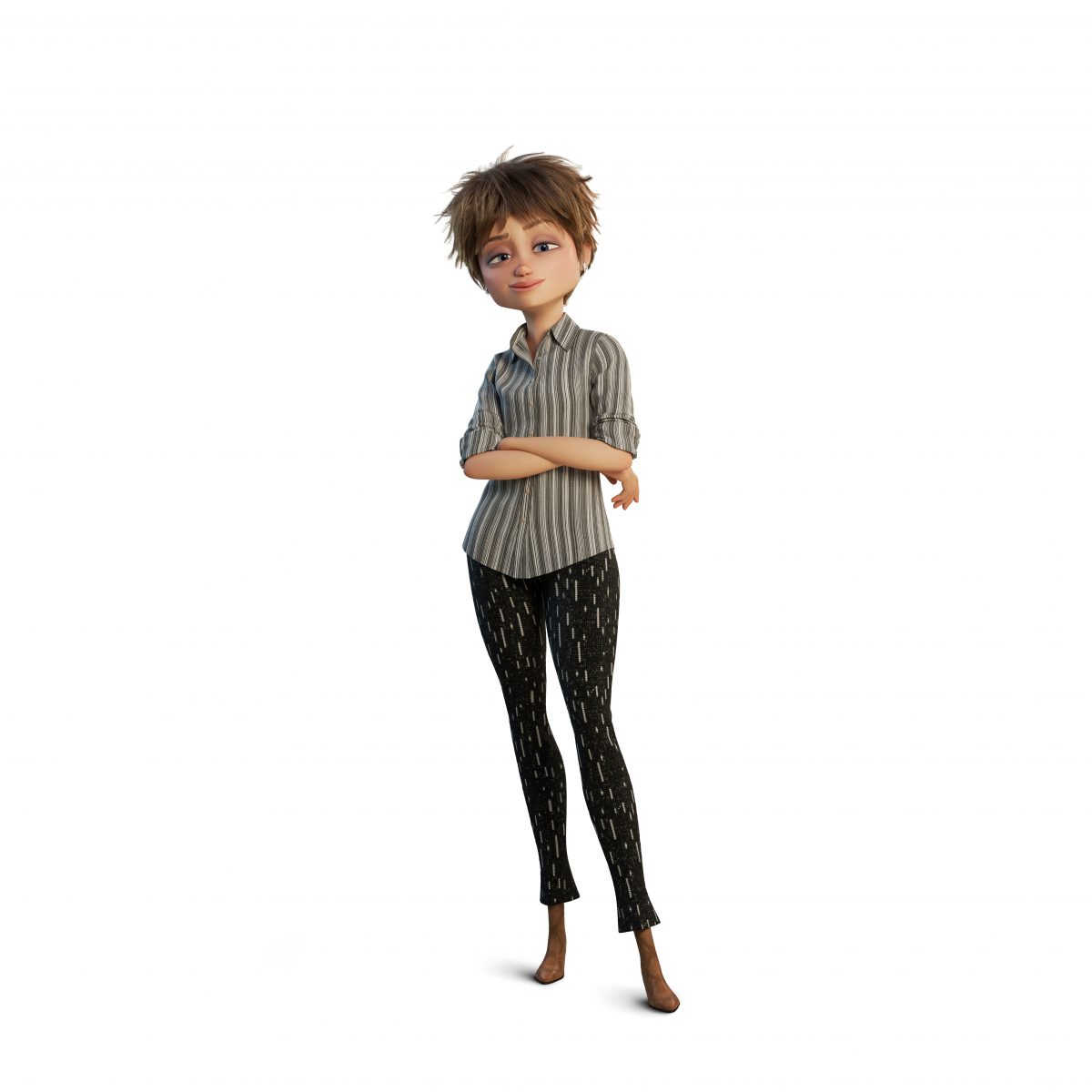 Of course what we see on screen isn’t anything like what happens before movies are ready for public viewing. A ton of work goes into creating magic and getting the chance to learn a bit more about what went well and where the hiccups were can really help you appreciate the final product that much more.

Bob: You have to trust Brad because you don’t he’s putting that movie together, obviously, up at Pixar. So, you’re not really seeing that. And he knows the tone of it all and the other characters, and it’s changing over time. You could feel it changing in the script, the tone, a little bit, but you don’t know really know where or how. And you never have the whole script. You really just gotta guess at what might work. You give him what he wants, get that first and then maybe say…”What if I tried this and that?” 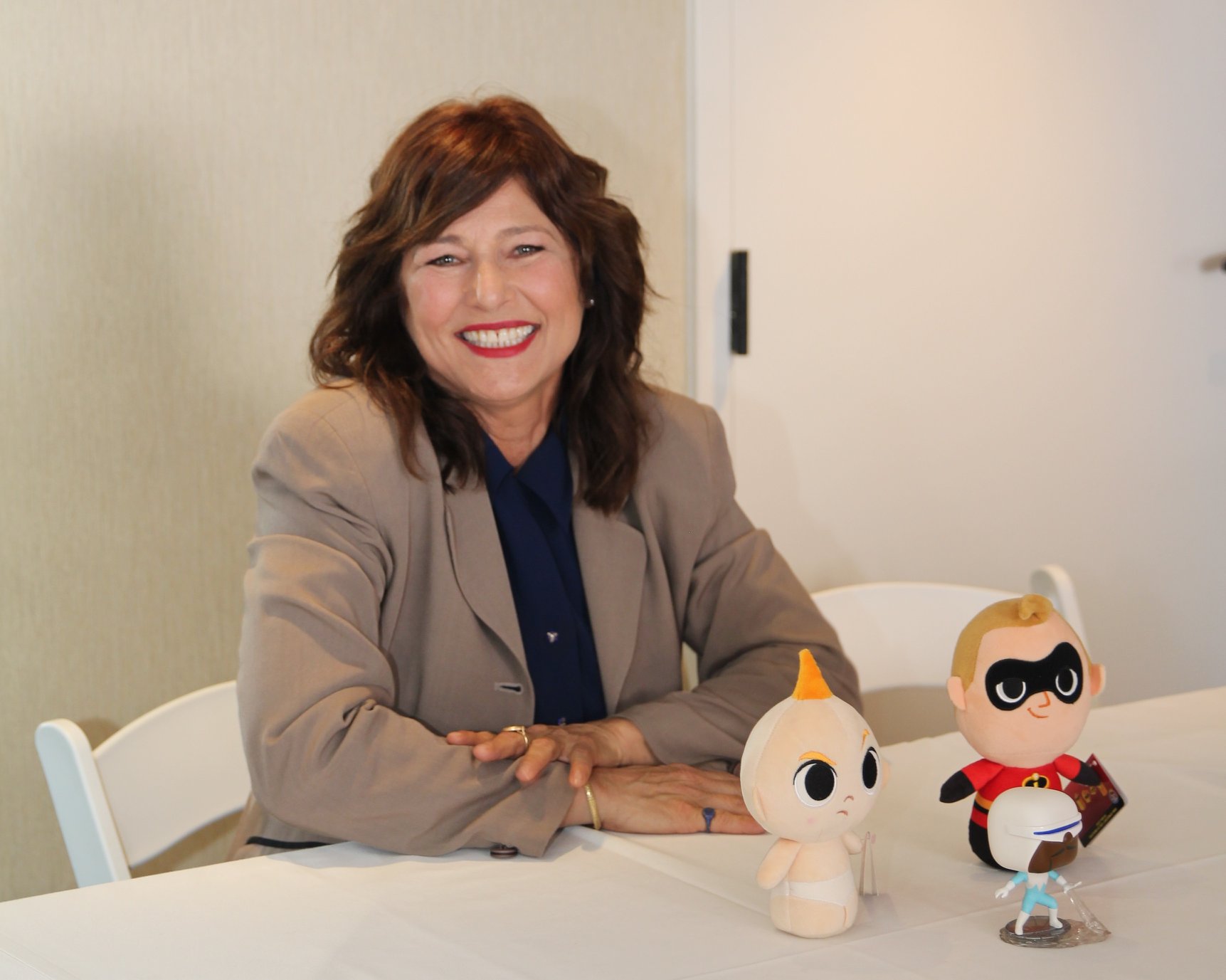 A ton of spoilers were tossed out during this part of our interview (don’t worry, by this time, we had already seen the film and I certainly won’t dump any spoilers here) but do know there was a great conversation had about the watching Elastigirl and Evelyn Deavor on the screen. You’ll know it when you see it. *wink*

Bob: Everybody talks about how Holly Hunter and the Elastigirl’s story and being a female superhero is so great for women, and it is. And I’m glad my daughter saw that. And I’m especially glad she saw the scene where the dad’s knocking on the daughter’s door. 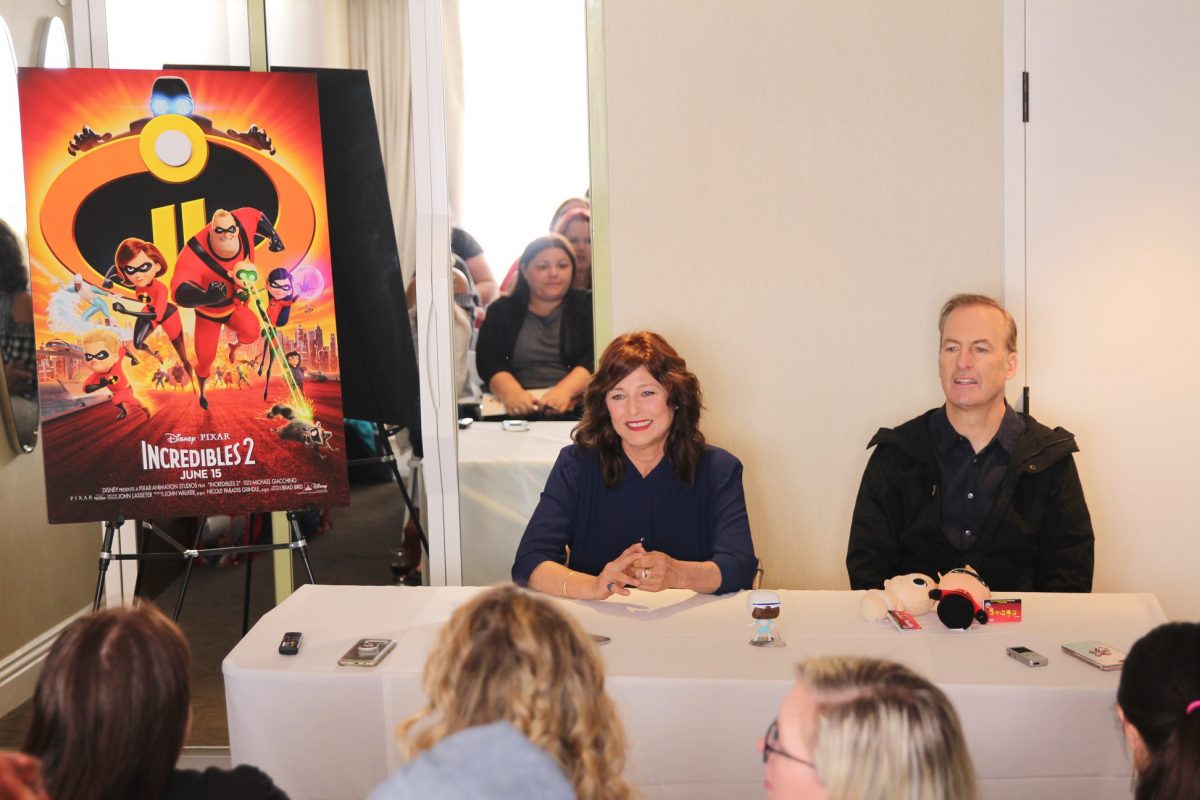 Can’t wait to hear what you think once you see these two in action!