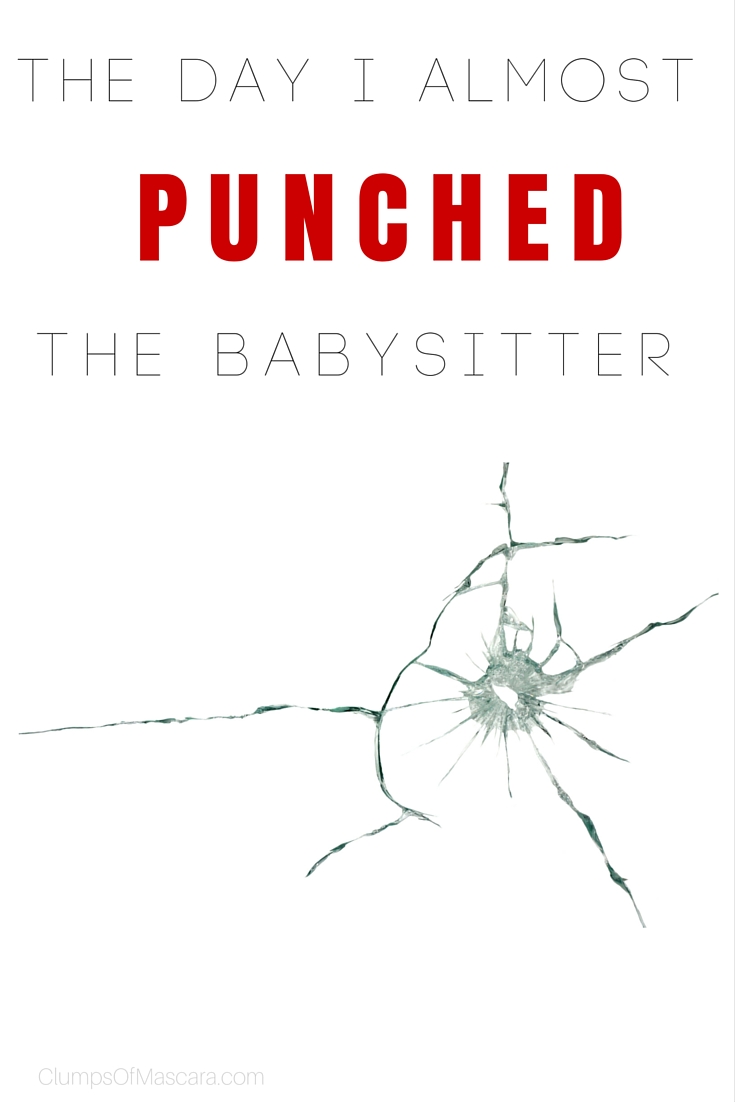 Okay, before you self-righteous mommies start slamming me, LISTEN – I’m okay with being away from my children. I don’t always like it but I deal with it because mommy has to work and live and sometimes that means leaving my children in the (hopefully) capable hands of someone else. I’m not alone. Most mothers across the world are working mothers and long gone are the days of having your mom, grandma or aunt watch your kid. Shoot, my mom is still working! I am proud to be a working mother and while I deal with mommy guilt regularly (who doesn’t?), don’t come for me in the “OMGGGGG, this is why I never leave my kids” department. Because I ain’t tryna hear it.

Okay. Sweet disclosure, right? Now that I’ve gotten that out of the way, come join me over here on the rug while I tell you story about how I almost punched the babysitter.

We’ve used many babysitters before. Almost half a dozen. Most have been referrals from friends and I always find these to be the best fit. But in the past year, several of our sitters moved, graduated and got married. Which, sucks…. I mean, how dare they live their lives when I need them to help me with mine! Whatever. I mourned their fleeting and I’ve been on the hunt for a new sitter ever since – mainly for EB.

Esposo works a loooooot. Many of his hours are worked out of town but even those that aren’t, it is not out of the norm to go days without seeing him because he leaves before we wake up and comes home after the kids and I are in bed. We’ve got no family in town and this year I finally admitted that I REALLY needed help. So the searching began.

I interviewed about 6 girls. I used Care.com (many of my fellow mothers said they found great sitters using this service) and love how easy the site is. We found Melanie* and she seemed to be great. We called her in for an interview.

The red flags went up the minute I met her. She just didn’t seem “into” this. She wasn’t excited. She didn’t really interact with our girl. I kept telling myself that maybe she was just lowkey. Y’know…not everyone has an excitable personality. I mean, I think you should if you’re a babysitter but it wasn’t a huge deal breaker.

It should have been. The second red flag was her lack of voices when she’d read EB stories. Because, I’m sorry…you can’t read a kid a book and NOT do the voices.

Sadly, the third and final deal breaker was one that had my blood boiling so hot, it could have melted the snow left from that snowstorm Jonas. After returning from my trek at The Makeup Show Orlando, I not only arrived to a trashed house but also to news that my toddler had no problem delivering…

In my head, I punched this girl. If I had found this out while she was still at the house, I would have punched her. I know, I’m terrible. And probably a little violent. But lemme tell you, Mama Bear doesn’t play nicely when you put her babes in danger. Anything could have happened in the 5 minutes that they were in the car. The possibilities played over and over again in my head. I couldn’t sleep that night. I woke up the next morning and called to fuss at Melanie again. She needed to understand how stupid her decision was. The way she brushed it off infuriated me. She didn’t get it.

I could have punched her. I still want to punch her. But naw, I can’t do, jail time, y’all. They don’t serve dairy-free options. 😂

In conclusion: I almost punched the babysitter.

*name changed to prevent my village from finding this sitter.