Back in the day when Clumps of Mascara was a baby blog and had a good 2-3 readers, I wrote a post on Urban Decay’s Primer Potion and how the packaging is worse then finding an expired coupon.

I ain’t playing…it was pretty terrible.

I’d like to think that I am responsible for the “cutting UDPP down the middle to reveal more product” idea going mainstream. Nah, I’m jivin’, but ’til this day, that is my most popular post. Ever.

Ain’t that somethin’? You can check it out HERE.

I wrote that post a little over a year ago.
Fast forward to 2009 and guess what Urban Decay has done? 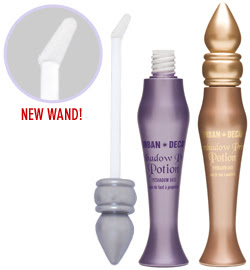 I feel like Urban Decay should have thrown “New packaging unveiling” parties all over the world. This is such a big deal to me. Many of us beauty bloggers, YouTube gurus and consumers expressed our frustration and outright annoyance with the way that the initial wand went STRAIGHT down in the tube. A LOT of us ended up throwing away what we thought were empty tubes, when in reality, over 60% of the product was left.

Dissatisfaction in large numbers can lead to changes, people. We did it!

I actually STOPPED using this product because I got irritated with always having to do surgery on it just to get my $17 worth of primer. Will I trash my Too Faced Shadow Insurance primer and stock up on UDPP? Hells no. But I don’t mind finally trying the Primer Potion in Sin.

Now that looks hot. Has anyone tried it?

Sin shall be mine!